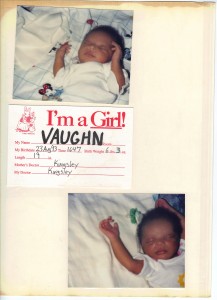 I gave birth to my first child.  Like all mother’s I remember that day as if it were yesterday….

It was a hot and sticky day and I was stationed at Fort Polk, Louisiana and I was 4 days past my due date.  To say I was miserable would be putting it mildly.  I woke up early that morning with a slight tightening of my stomach but nothing that indicated that labor would be occurring any time soon.  My doctor had scheduled a check up for later that afternoon, so I went to work and waited for my appointment.  I was literally praying that the doctor would induce labor.  Being pregnant in Louisiana ain’t no joke.

My sponsor took me to my appointment at 11:30 and he sat there while the doctor hooked me up to the fetal monitor.  When a soldier arrives at a new duty station, they are assigned a sponsor to help them navigate through in~processing and get acclimated to the new area.  My sponsor was wonderful, he knew I was single so he and his wife decided that she would accompany me in the delivery room to have the baby.  During my appointment, my sponsor was cracking jokes and had me and the other pregnant lady in the doctor’s office laughing so hard the doctor couldn’t tell if we were having contractions or laughing so he banished my sponsor from the office.  After we calmed down, it was determined that I was having “mild” contractions but the doctor assured me that the baby probably wouldn’t come for awhile.  So he gave me a choice ~ I could go home or stay at the hospital.  I chose to go back to work.

Around 3 PM I felt “something” and alerted my co~workers.  They suggested that I go back to the hospital, which I did.  The nurses checked me in and the doctor checked me out.  “It’ll be at least 13 hours,” he said with authority.

One hour and forty~seven minutes later, my daughter was born.  We barely made it to the delivery room because the doctor kept saying “It’ll be at least 13 hours.”  My sponsor’s wife made it just as I was giving the final push.

I didn’t know what to expect when I found out that I was going to become a mom.  No one had ever looked at me and said “Now there goes a woman who should be responsible for another life.”  Truth be told, I had never looked at myself and thought that.  In fact, I was never really sure that I wanted kids but when the nurse placed that baby in my arms, I.  Fell.  In.  Love.

On 23 August 1993 at 4:47 PM, I found my heart.  It hasn’t always been easy and there have been times when I’ve wanted to lock my daughter in a cave until she reached 21 but we survived.  So today, on her birthday, I just want to say “Happy Birthday, S’monster.  I love you.  And I’m proud that I’ve had the opportunity to watch you grow into the beautiful young lady you are today.”

Today’s Small Talk Six topic is “The last 6 things you do before you close your eyes at night.”  I am not […]