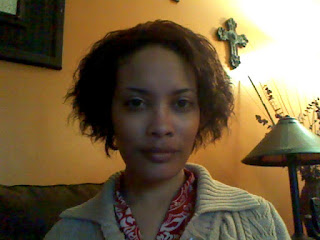 It’s been a week since I posted that I was going to let my hair go natural and I’ve been asked when I’m going to post some pics. Well, here they are… It’s actually been about four weeks since I’ve put a relaxer in my hair and maybe six weeks since I’ve dyed it.

To see a before picture, click here. So I’m at the point now where I have two different hair textures on my head – wavy near the scalp and straight at the ends (where the relaxer remains). The red dye that I had in the front of my hair has now faded to a rust color – this part is hard for me. I’m used to dying my hair every couple of weeks. I treat my hair as an accessory because, well, that’s what it is. I’ve had red hair, pink hair, blue hair, black hair, burgundy, blonde, olive drab green (that was an accident, but I wore it like a champ)….
Anyway, to combat the dual texture problem, I’ve taken to braiding my hair at night and finger combing it in the morning to blend the waves. I think one of the biggest differences I’ve noticed is that the texture of my hair is definitely different – the natural part is actually much softer than the chemically treated portion. This has me a little concerned – I do not want my hair to break because I am not ready to do the big chop.
I’m actually handling this whole transition thing better than I thought I would – of course, it’s only been four weeks so let’s see how it goes in another two weeks…

Well it’s been about 3 weeks since my last update on my hair transition and I’m still going strong. Barely. I’ve gotten […]

It’s been two weeks since my last post about transitioning from relaxed to natural hair and let me just say, my hair […]