I’ve been dying to do the Zumba thing since it became all the rage, like, a bazillion years ago.  So why am I so late to the game?  Because I have a lot more pride than I do courage and rhythm.  I just couldn’t see my rhythmless self trying to Zumba with a group of people, it wouldn’t be fair to them or to me.  Therefore, I went out and bought Wii Zumba.  I couldn’t wait to get it home and try it out.

Now, let me throw this out there, with computers and other gadgets, I’m pretty quick but for whatever reason, I cannot get the hang of the TV and the Wii.  I have some sort of weird mental block against that input/output, AV thingy, so I had to have Mr. 15 set up everything for me.   Insert teen boy snark here. After waiting for the kids to get on the bus, I was ready to shake it.  I didn’t want the kids here, no witnesses.

I opened the box, pulled out the disc and put the Zumba belt on my waist.  I set the game to “Learn the Steps”, you know, ’cause I’ve never done this before but I was immediately bored.  Seriously, that’s the equivalent of reading the manual and no one ever reads the manual. I wanted to jump right in there and do my thing.  So I put it on the “Beginner’s Workout” and started dancing to the music.  I’ll admit, I didn’t hit every step but I had so much fun swinging my hips that I didn’t mind.  The game does a fair mix of Salsa, Merengue, belly dancing and other Latin/Caribbean moves.  With each dance step, every body part is in motion, so you’re definitely getting a full body workout.

Talk about sweating, I had sweat coming from places I didn’t even know had sweat glands.  And you know how they say you feel more energized after a workout?  I totally did.  But at the end of the day, I was ready to crash.

Do you Zumba?  Are you taking a class or do you have the DVDs or the Wii?  What do you think?

Disclosure:  I did not receive any compensation for this post.  I’m just pretty excited about Wii Zumba.

On Monday I posted that I’d be participating in the 21 Day Activity Challenge that’s being hosted by my friend and fellow librarian, […]

I’m fresh off my first day of the C25K program, as in I just got home from the track and I wanted […] 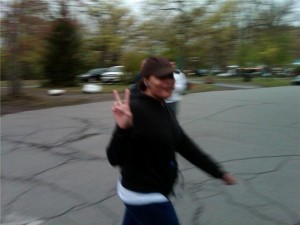 If you’ve been reading my blog for a while, you’ll know that every blue moon I get a wild hair and decide […]