We’re not allowed to talk about the time before Miss 14 was born. This is a family joke that started when she was about 5 and discovered that we had existed as a happy family of six before she was born. After looking at the family album, Miss 14 (then Miss 5) promptly placed her hands over her ears and started yelling “Noooo!” When we finally got her calm enough to ask the problem, she replied “I don’t want you to have a life before me.” Ummmm, spoken like a true last child who has been spoiled rotten by her family. So we indulged her and never really spoke of the “Time Before B____.”

As the years passed and the kids grew older, Miss 14 grudgingly accepted that, while she has rounded out our lives, we were pretty happy before she came along. But she’s still wished for days that were all about her.

This weekend, her wish came true…

On Friday, I gave up my trip to St. Louis to eat lunch with her at school; a decision I would make again, any day of the week. We had so much fun. Then, on Saturday, the family and I loaded up the truck and went on a historical scavenger hunt also known as the Driving Tour of Civil War Sites around Cape Girardeau/Jackson. What a fun way to get to know the area! Actually, it was an extra credit assignment for Miss 14 but she wanted the family to go along.

I honestly had no idea that this area was so steeped in Civil War history. We had fun, hopping out of the car, snapping pictures, laughing and, of course, bickering. Really, what family outing isn’t complete without a little snapping? After we finished the driving tour, Miss 14 decided that we should go to The Branding Iron for lunch. Good choice, young lady, good choice. They have the best ribs. Ever.

After dropping the guys off at home, the girls and I decided to head over to the Conservation Center and go for a walk along the trails. We spent a lot of time laughing, walking, giggling and snickering… As we started heading towards the car, the girls ran ahead of me and started talking and laughing. As I snapped a few pictures of some leaves, I turned and saw Miss 14 and Miss 16 laughing with abandon. I have no idea what they were laughing at, they wouldn’t tell me but I do know that I’m glad that I was there and that I got to hear it. 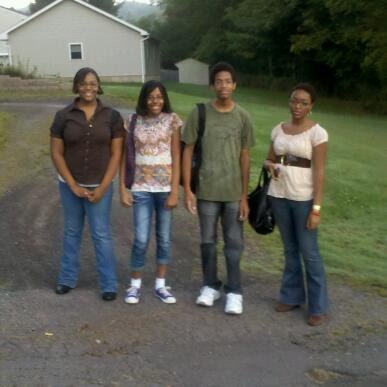 When I was a kid, my favorite place in the world was the library.  I would wander the shelves for hours until […]

Because Ms. A did not come to play. 😍

We had a doozy of a storm last night so, of course

“The people who make you smile from just seeing