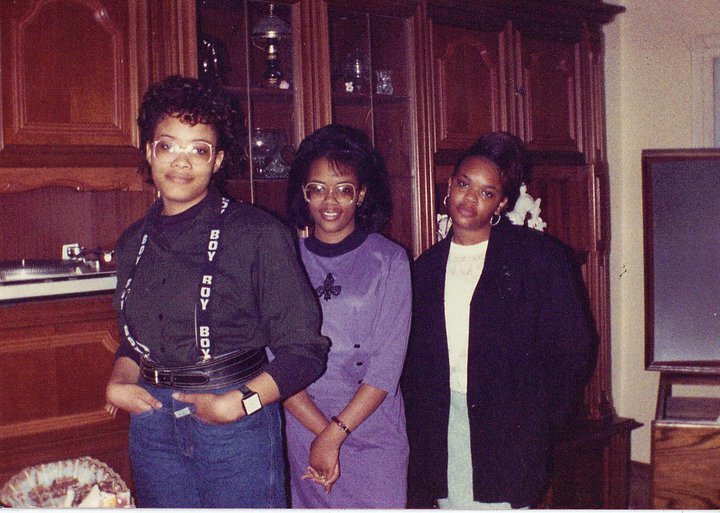 This is one of the few pictures of my sisters and me that exist of our time in Italy. I used to wear the heck out of those suspenders, I even had a matching baseball cap that I wore when I was feeling particularly snazzy. And that watch? It had the words to Cyndi Lauper’s “Time After Time” written across the face. I used to save up my money {I worked at the base post office} so that I could buy a new watch every month – I was a big fan of the Pop Swatch. I still have a thing for watches, but I mostly wear my Apple watch these days.

Whenever I tell people that my sisters and I grew up in Italy, they almost always exclaim “That’s so cool! You must’ve loved it.” I think what people fail to realize is that when you’re a kid, you’re subject to the whims of your parents. Where they went, we went. My parents were in charge of the church over there so we spent a lot of our time either on the road to church {which was about an hour and a half to two hours away from our home, depending on traffic}, in church, or on the road back home from church. We were in church three to four times per week, depending upon what was going on. So that didn’t leave a lot of room for sightseeing and hanging out. So when I say “we grew up in Italy,” I don’t mean that we lived in Italy.

As we grew older, my sisters and I were allowed a little more independence. For example, my parents took my little sister and traveled Europe and left my sister and I alone in Italy for about a week. I think this is where I should mention that we didn’t have telephones in our homes, so if there was an emergency, we’d have to go across the street to the gelateria {ice cream shop} to use the pay phone. During that week, my sister and I rode our bikes to and from base, we had friends over, and watched TV. It was a different time and place. My kids are all adults and I still ask them to check in whenever they go somewhere. 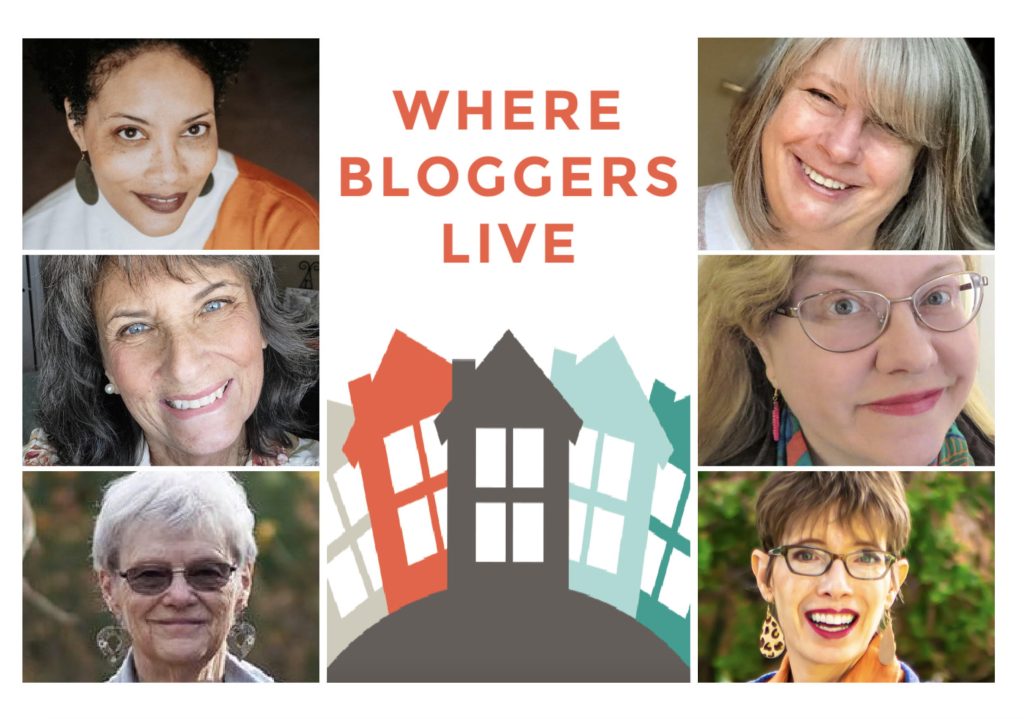 Welcome to the monthly edition of Where Bloggers Live. It’s kind of like HGTV’s “Celebrities at Home,” but…Bloggers! Who doesn’t like to peek behind the scenes and see inside people’s homes? Over the next few months, we’ll share about our work spaces, home towns, and more!

Since there aren’t very many pictures from our time in Italy, I’m going to share a few memories and pictures from when we were kids and we lived in the U.S. My bio dad was in the Army so we lived all over the U.S. before my parents divorced and my mom married my stepfather {which is when we moved to Italy}. 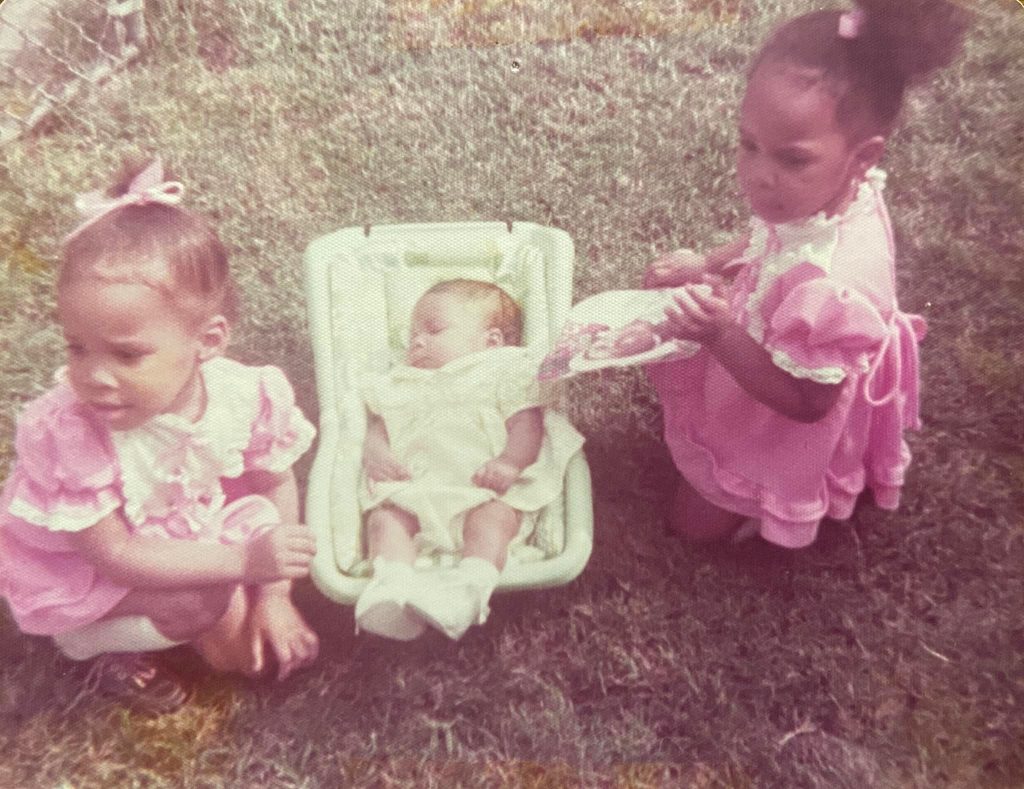 My sisters and I were all born in D.C. and, in true fashion, my twin sister and I made a dramatic entrance {you can read about it here, it involved police cars and a birth in a police car}. This is a picture of my twin sister and I with our little sister; I remember wanting my mom to take her back to the hospital when she came home. My sister, on the other hand, absolutely adored the new baby and couldn’t get enough of her.

I’m guessing by our outfits and the church fan in my sister’s hand that we were probably at church. My sisters and I have always joked that our first stop after leaving the hospital at our births was the church. We really aren’t that far off, considering we had to pass the church to get to our home. And, yes, I was a strawberry blonde. 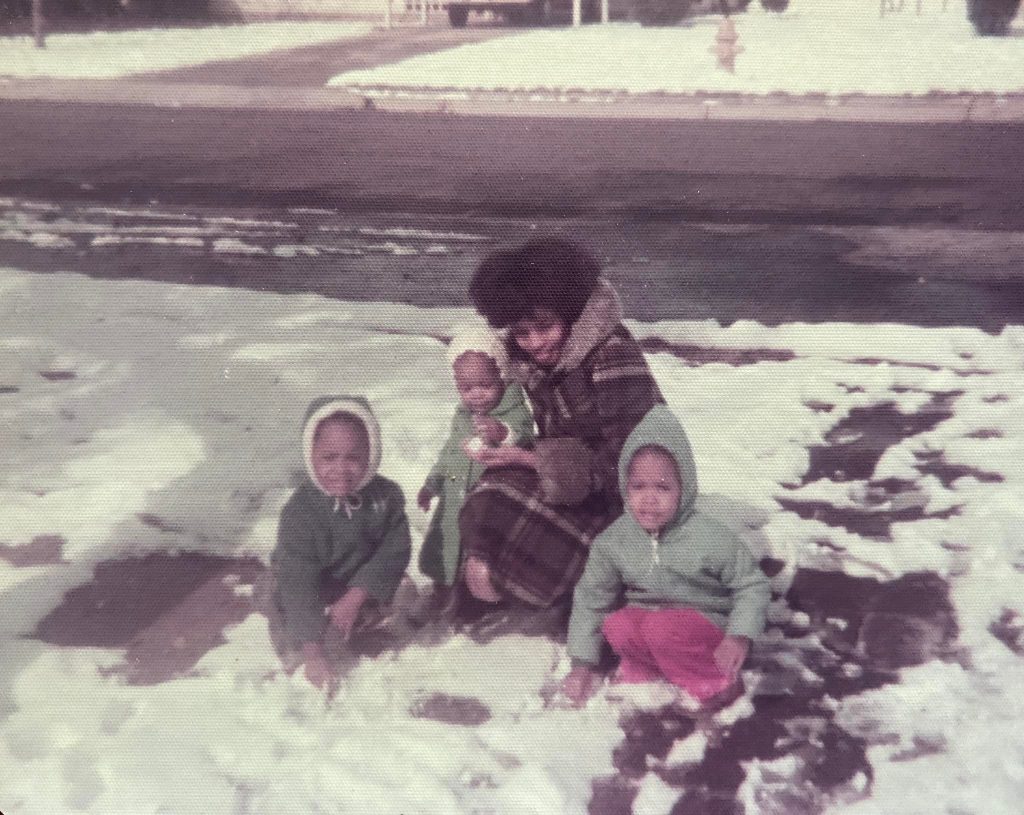 We left D.C. soon after our little sister was born to join our dad in El Paso, Texas. This was the first snow. I still remember how excited we were but also how very cold. Funny story, the first time my kids saw snow, they had their little faces pressed up against the window, and they were screaming: “Milk, Mommy! Milk!” Poor little goof balls. 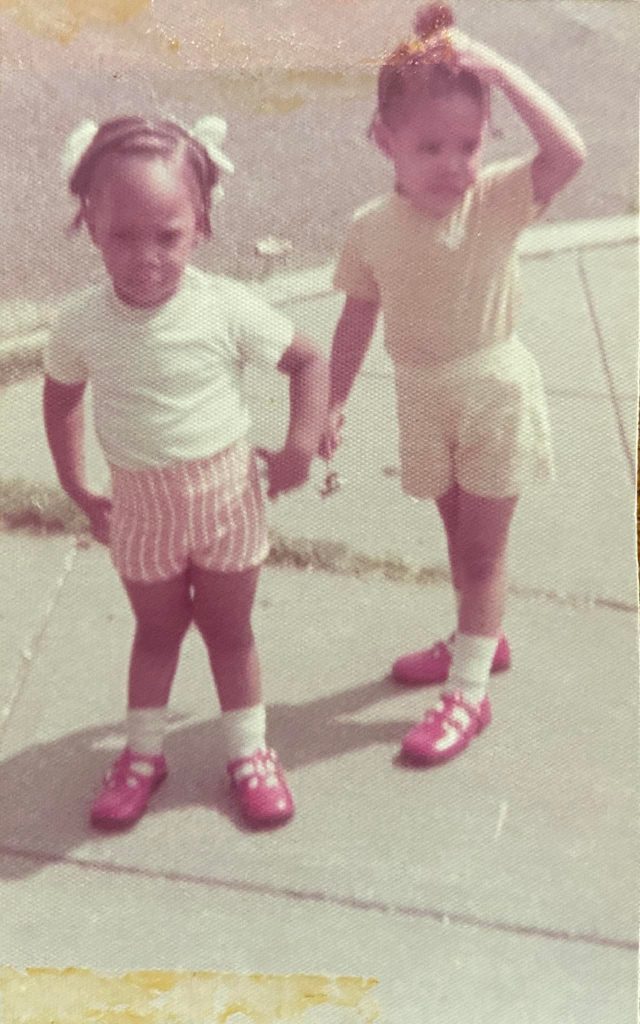 This was one of the few times when my mom did not dress us a like. I mean, not completely. Check out those shoes… Needless to say, I still have a thing for red Mary Janes. 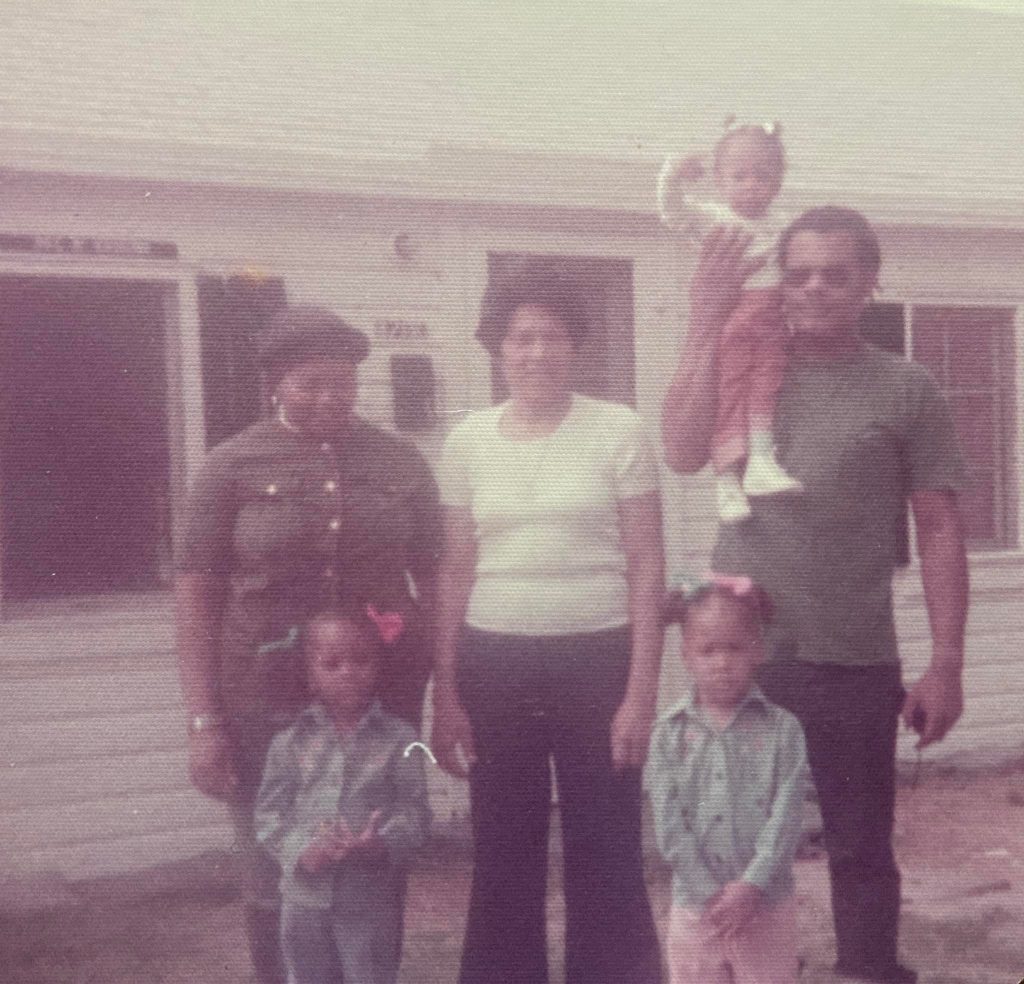 My paternal aunt and grandma came to visit us when we lived in Texas. My aunt was wearing headwraps and mineral makeup before it was a thing. She had a little clay jar of powdered makeup – kind of a brick color – that she used to put on her eyes, cheeks, and lips. Even as a kid, I used to think she was so cool.

My favorite memory is when I lived with them in D.C., this was just before I moved to Italy, and my grandma, aunt, and I would watch Dynasty, Dallas, Knots Landing, Falcon Crest, and, later, The Colbys together. Grandma would come home from work, make a pot of coffee, light a cigarette, and sit in her favorite chair in the kitchen, we’d hoot and holler at the shenanigans. That was also the first time I cussed in front of them. Diahann Carroll’s character, “Dominque Devereaux,” had just said something shady to Alexis Carrington, played by Joan Collins, and I said “Damn!” I was about 10 and was rewarded with a swift smack in the mouth from my aunt. So much for being one of the girls… 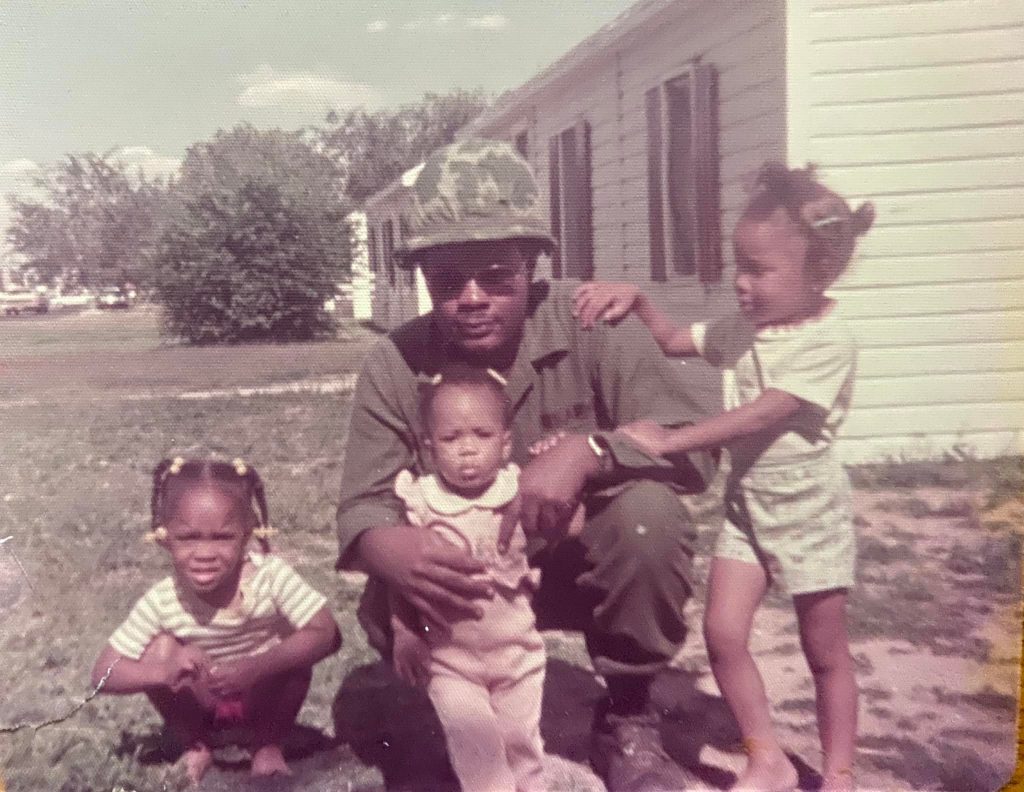 This is my bio dad. I was such a daddy’s girl. I’ve always said that he and my mom never should’ve met much less married. They were total opposites, and not in that whole romantic opposites attract kind of way. My dad was a party animal and, thanks to him, my sisters and I learned the words to many R&B and soul classics. On the rare occasions when Mom would leave us with him, while she attended church, he would have friends over and they would play records and dance. His friends would even cheer my sisters and me on when we showed off our moves. We also learned how to roll joints and pick them up using roach clips. Mom would flip if she knew this. Honest to goodness, it wasn’t until I was in my twenties that I found out that those little black and grey cases were for 35mm film. I just assumed everyone smoked weed and some people kept it in their fridge.

My dad was also an incredibly talented artist who taught me how to write in cursive and draw figures of women {using Ms. Nichelle Nichols as inspiration}. He was so much a Trekkie that when he died, his childhood sweetheart put a transponder in the casket with him. 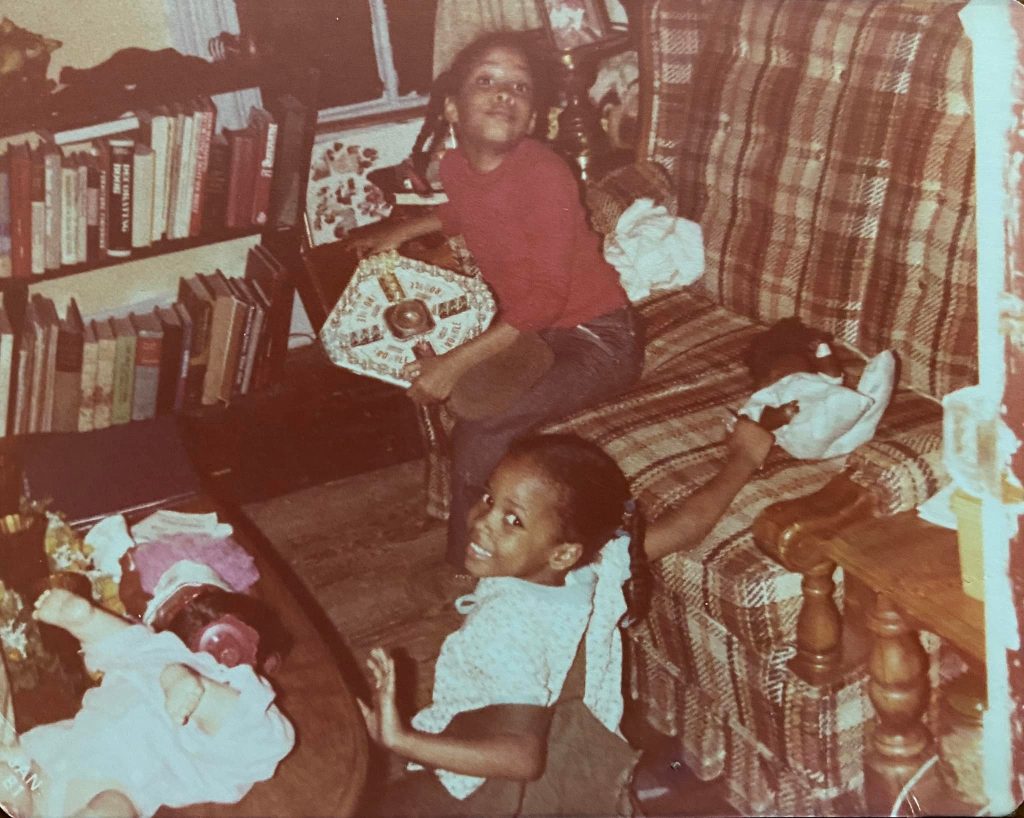 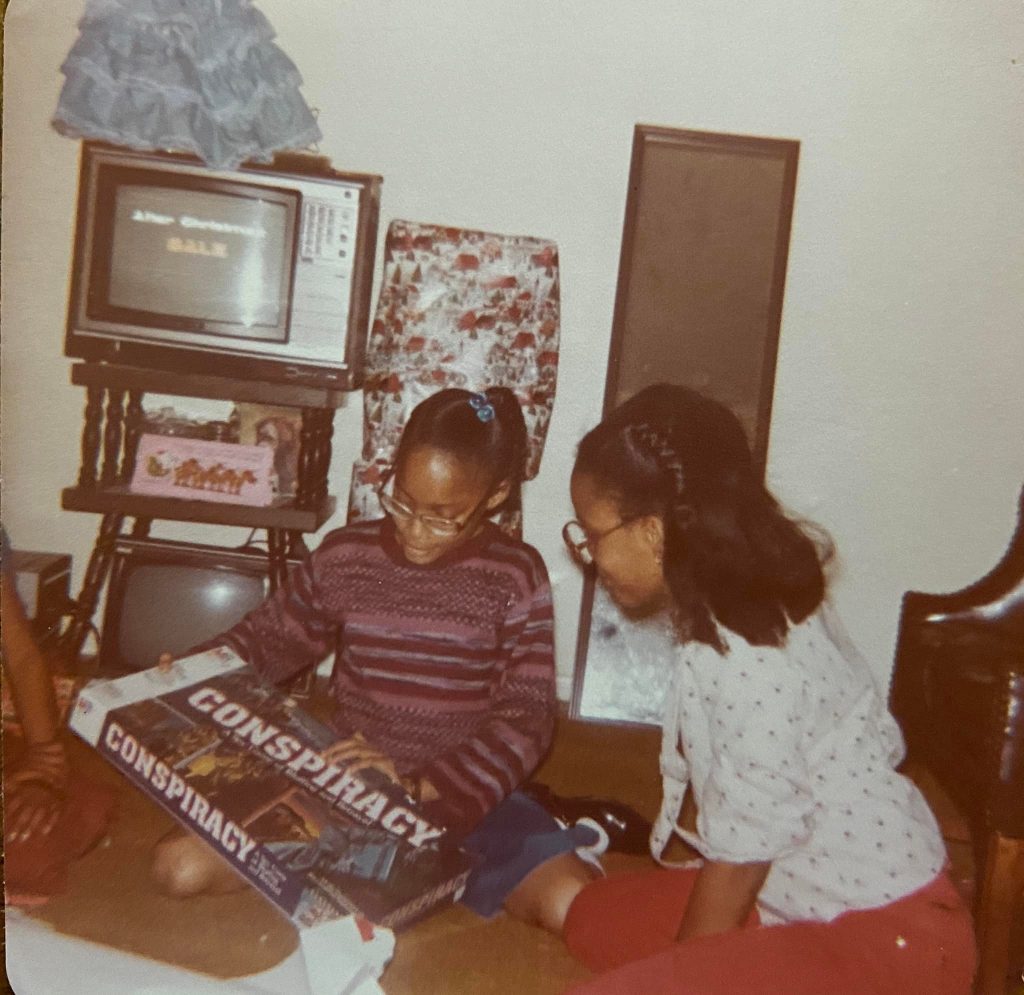 Trouble and Conspiracy. That sums up my childhood right there. I remember being so excited when I unwrapped those games. And when I got Clue a few years later? I was in heaven! If you look at the bottom corner of the top picture, you’ll see that Kareena, my childhood doll, celebrated all major holidays with us. She’s still here and is one of the first things I grab whenever there’s an emergency {and when we move, she travels with me}.

And because we all love a good style post, here are two of my favorite kid outfits… 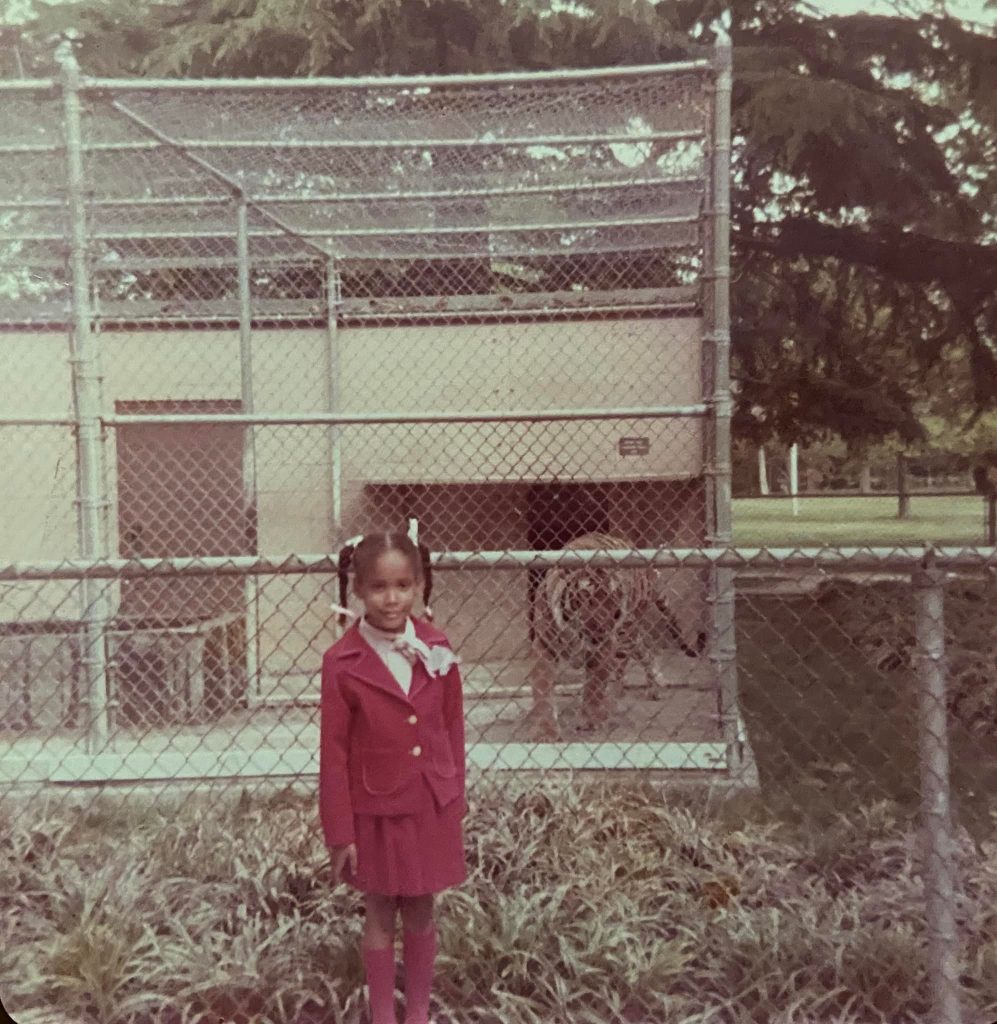 I’m probably the only kid who has ever worn a suit to the zoo. I remember loving that suit so much. I looked like a little news anchor, which is appropriate, considering Barbara Walters was my hero. Seriously. I wanted to be a reporter… I thought I’d get dropped in the middle of war zones or report from areas of serious humanitarian crises. When I was a teen, I read Message from Nam by Danielle Steel and that only solidified my desire to do some type of journalism. As you can see, that didn’t happen… 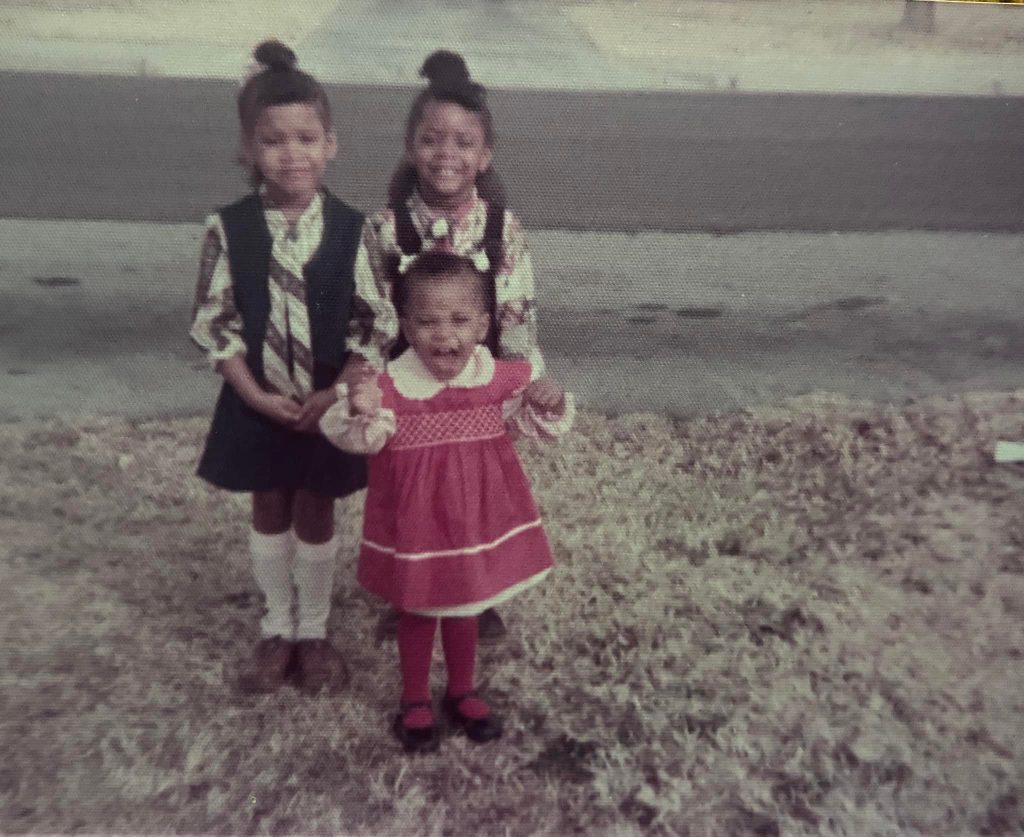 Again with the news anchor outfit. Only this time, there was a side of Holly Hobby. As in those socks had Holly Hobby on the sides. I was very particular about how and when I wore them. I even had a little Holly Hobby lunch box – metal one, thankyouverymuch – that I carried.

I’m so happy for this prompt. It gave me a reason to go digging through a bunch of boxes to look for pictures that I didn’t even know I had. I shared many of them on Facebook, which was great because my sisters hadn’t seen many of these pictures since we were kids. My sisters lost touch with our bio dad when we were kids, so my little sister doesn’t really have any memories of him, so it was nice to be able to share these and a few other photos of her and him together.

Do you have a favorite childhood memory?

1. Soon after the kids started taking health and sex ed courses, we made a list of words that were banned from […] 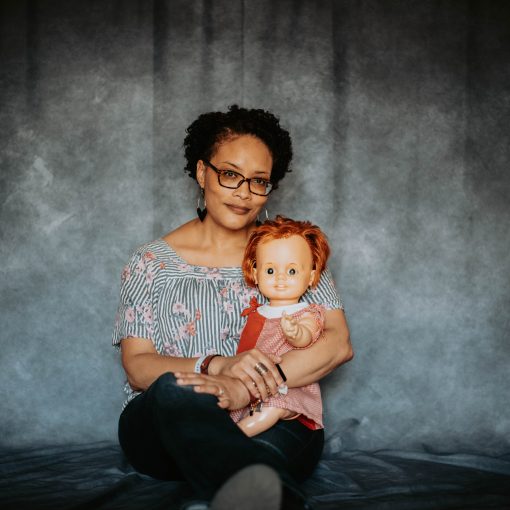 Hi. I hope you all are doing well. Things have been a little hectic over here. We went straight from one accreditation […] 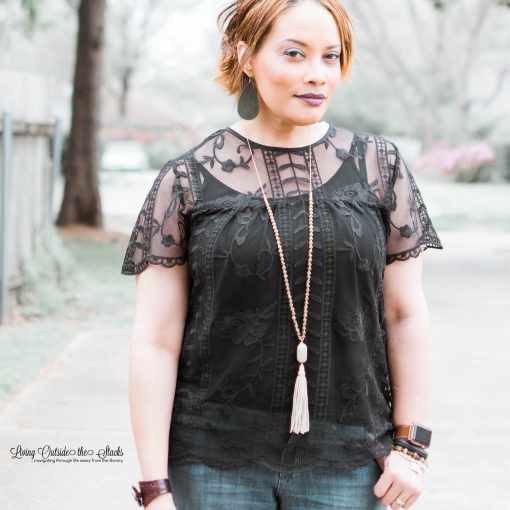