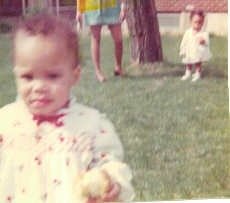 I always tell people that growing up some place and living some place are two very different things. My sisters and I grew up in Italy. Our time was managed by our parents, so traveling and exploring were left to them and school field trips. Once we hit our teen years, we’d been in Italy for so long that we took it and its surrounds for granted. We never thought we’d leave. We had the same feeling about Italy as some folks have about their hometowns. We don’t appreciate the things that tourists travel to see. 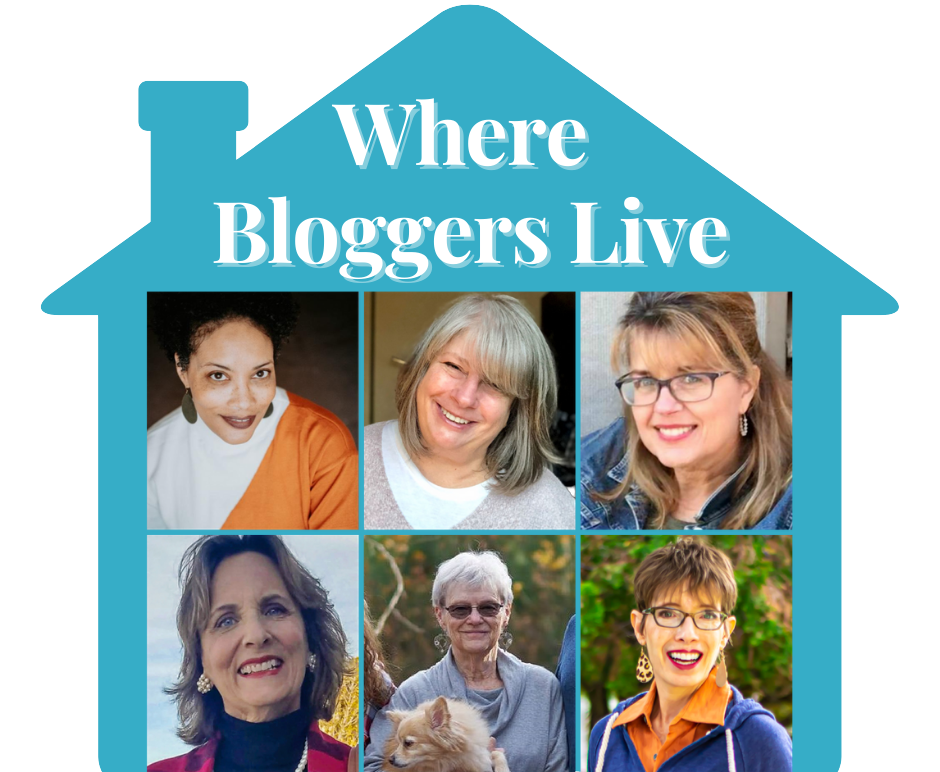 THE THEME: Where I’ve Lived

I grew up a military brat. My bio dad was in the Army and my stepfather was in the Air Force, then I joined the Army. Moving was a way of life for me. Unfortunately, photography was not. So I haven’t any pictures of the places I’ve lived only of me in some of those places. So I’ll share those pictures and some memories from those times: 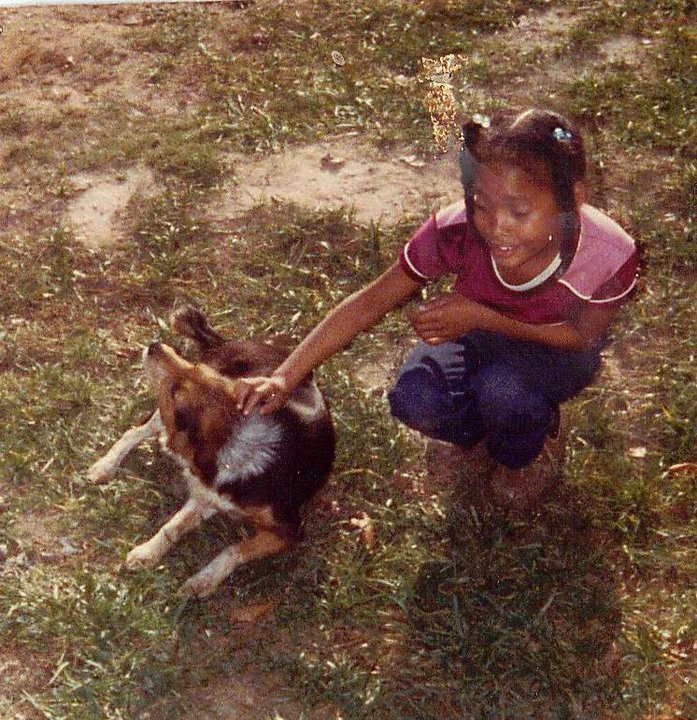 My bio dad was an artist, a chef, and an all around cool dude. When I was about 9 years old, I went to live with him in Spotsylvania, Virginia by way of Washington, D.C. One of our favorite things to do was watch Star Trek while eating Ramen Noodles. I know, I know, I said my dad was a chef, but that was our thing. Our house was a farmhouse style home. The back was primarily made of glass, with a large porch, that looked out onto a long dirt road. The back of the house {which was really the front} consisted of a door that led to my grandma’s garden. Behind the garden were nothing but woods. It was from those woods that my dad, grandfather, and uncle would cut down a Christmas tree that was so big, my uncle had to stand on the balcony to put the star on it. To this day, I’m not even sure how they got the tree in the house…

When we moved to Virginia, I asked my dad to get me a dog. I begged and pleaded and he kept saying no. For one, I wasn’t meant to stay with him for an extended period of time. My parents were in the midst of a divorce and I angrily told my mom that I wanted to go live with my dad. I think she thought he’d say “no” but he said “yes” and I hopped on a plane a few weeks later. Anyway, since my stay with my dad wasn’t meant to be a forever thing, he thought it pointless to get a dog.

However, I was a daddy’s girl and could get just about anything I wanted from him. Including a dog. I can’t remember my exact reaction to that little guy greeting me after school, but I’m pretty sure I screamed. That dog became my best friend, confidante, shadow, everything. Then he got really sick. My dad told me that he had rabies. I was young and didn’t understand. My dad kept telling me that we needed to put him to sleep because he was just going to get sicker and he might hurt me. I couldn’t imagine him hurting me. For days, I kept him in a cardboard box. I wouldn’t let anyone near him. I slept with his box in my room, the sound of his raspy breathing filling the night air. One night, while I was sleeping, my dad crept into my room and took him. The gun shot woke me. At the time, I was devastated. Looking back, I know my dad did what was best for me and for Champ. He let me hold on as long as I could but then he did the humane thing… The thing I was too young and too in love to do. 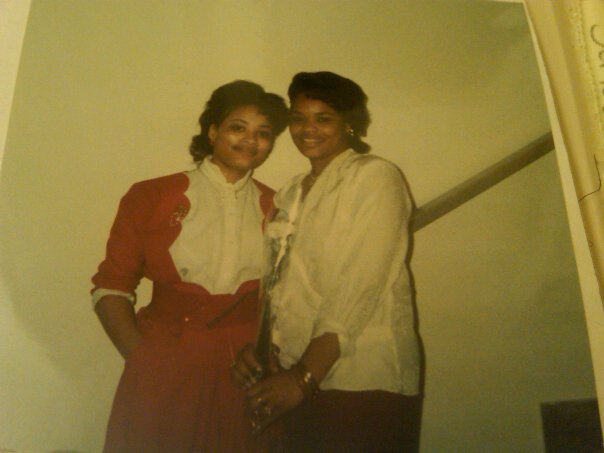 Italy is one of those places that I look back on with mixed emotions. There is so much hurt and anger attached to that place, but it was also the place where my sisters and I spent a majority of our growing up. It was a life without telephones in our homes, one with only a single English speaking TV channel, one where you could just as easily find yourself at a festival of saints or a political rally… We grew up under the threat of terrorist attacks, but never the fear of death. We had friends from across the globe, and but never worried about racism. But under the laughter, there were tears, there was anger, there was hurt. But I want to focus on the fun:

I’m not sure what my sister and I were preparing for in this picture, but I know that it was taken in Italy. I’m guessing we were somewhere around 16 or 17 years old. My sister and I were on the debate team in school. And, for whatever reason, people were totally fascinated by us. Actually, they were fascinated because we’re twins and I think we may have been the only set of twins on base. Anyway, when my sister and I would participate in debates or give our speeches, people from the other schools would crowd the classrooms and cheer for us. I still smile when I remember their voices: “Go, Twins!” and “Look at the twins!” My sister and I used to laugh because, ummm, shouldn’t they be cheering for their own classmates? 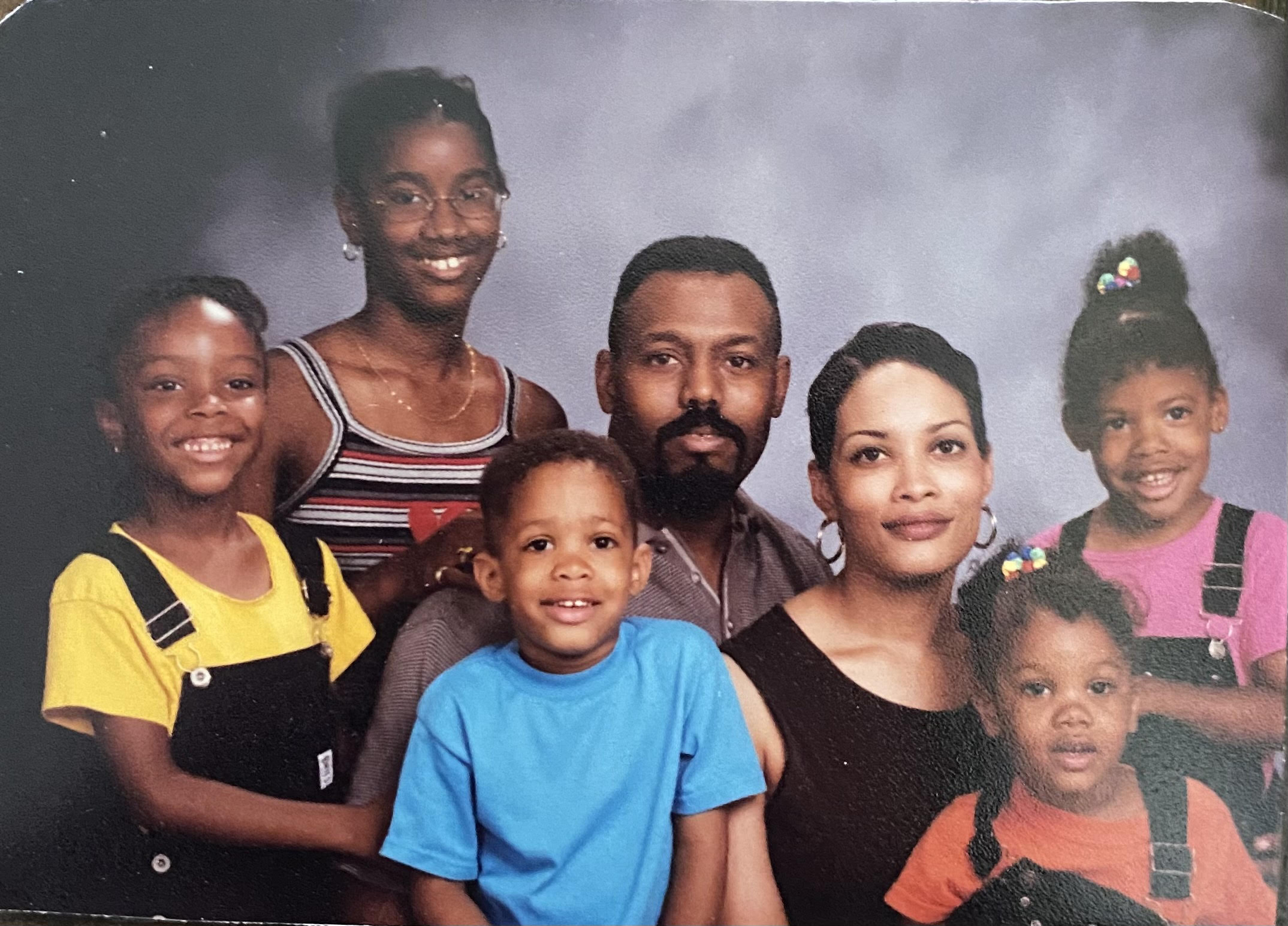 Pennsylvania is where we raised our family and bought our first home. Our youngest was born there and our other kids spent their formative years there. This is where Squeekerz adopted us. And where we fully understood why some animals eat their young.

When our daughter {the one in the yellow tee} was about 10 years old, I sat her down to explain the birds and the bees to her. I thought she was too young, but some of her friends had started their cycles, so I figured I’d better tell her before she got the wrong information. So, we talked and I told her not to tell the others, who were two and four year younger, because they were waaaay too young. The next day, I was driving the younger three to school, when my son says: “Mommy, what color were our eggs?” I keep driving and mutter a “What?” And his sister says: “When we were in your tummy, what color were our eggs?” Apparently, my daughter told them about our discussion and well… LOLOLOL.

Where did you grow up? Did you move around a lot?

YOU’RE INVITED TO JOIN US FOR STYLE IMITATING ART 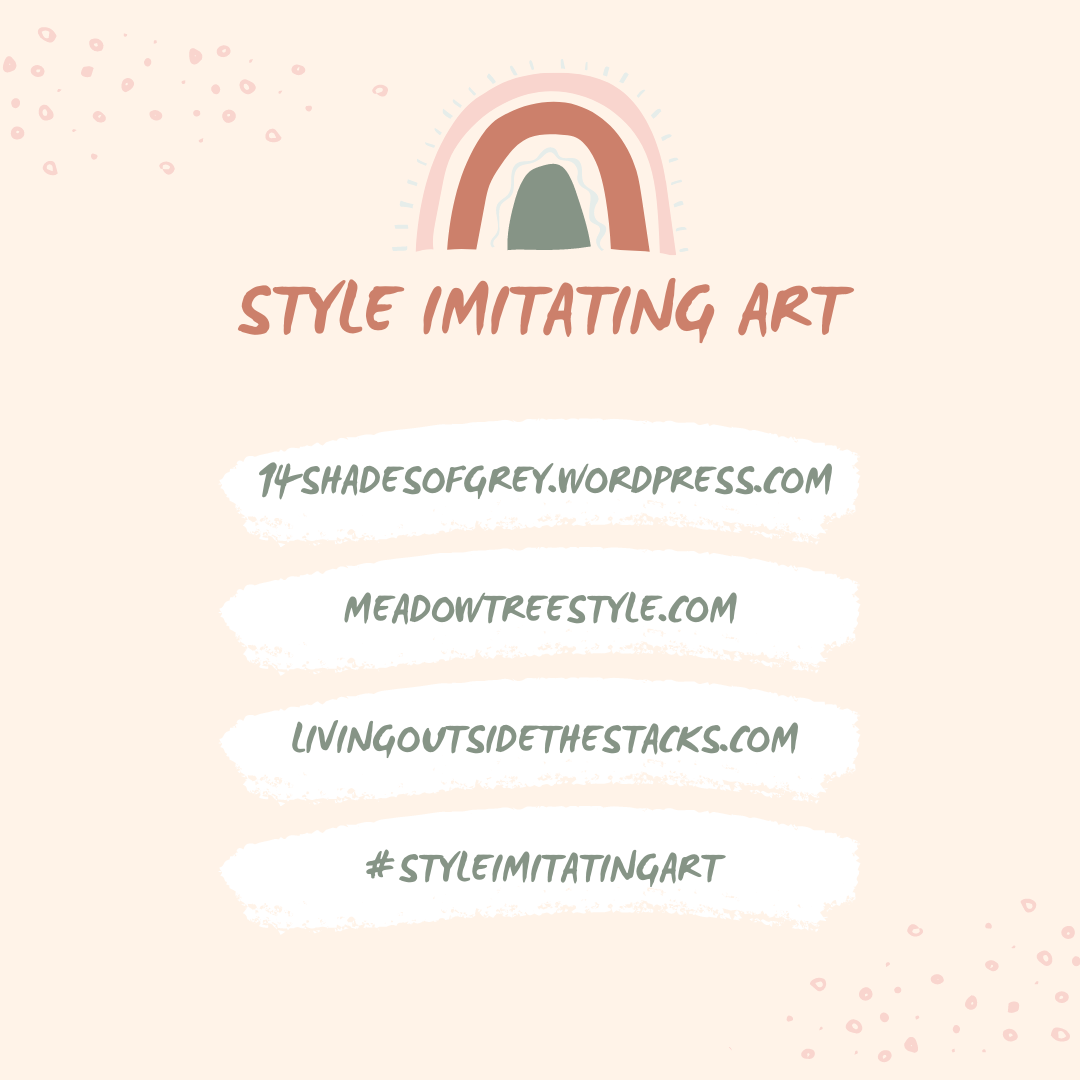 Style Imitating Art is hosted by Salazar {14 Shades of Grey}, Terri {Meadow Tree Style}, and me. Style Imitating Art challenges us to draw style inspiration from pieces of art. Every other Monday one of us selects an inspiration image and we each post the image on our blogs. The following Monday we share our art inspired outfits. Participants submit their art inspired outfits with the curator by 10 PM Tuesday and, that Wednesday, the curator shares all of the submissions on her blog. For the current theme, see this post. 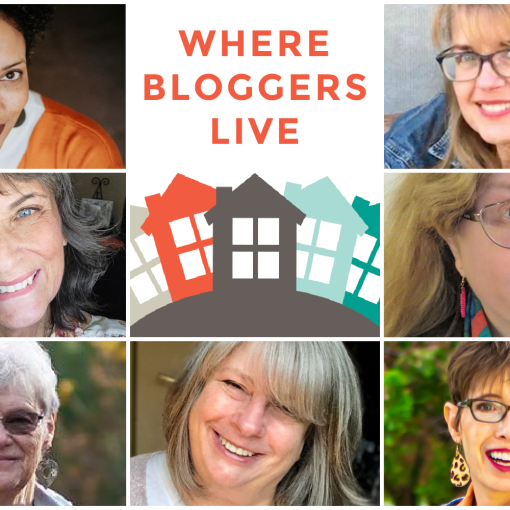 Hey, y’all, hey! How’s it going? Things are going well over here. The City is here, working on the sidewalk outside our […] 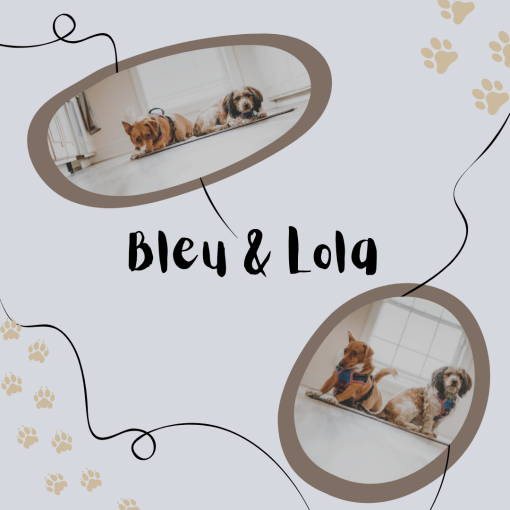 Are you a resolution writer? Like I wrote here, I don’t write out goals and things for the new year because I […] 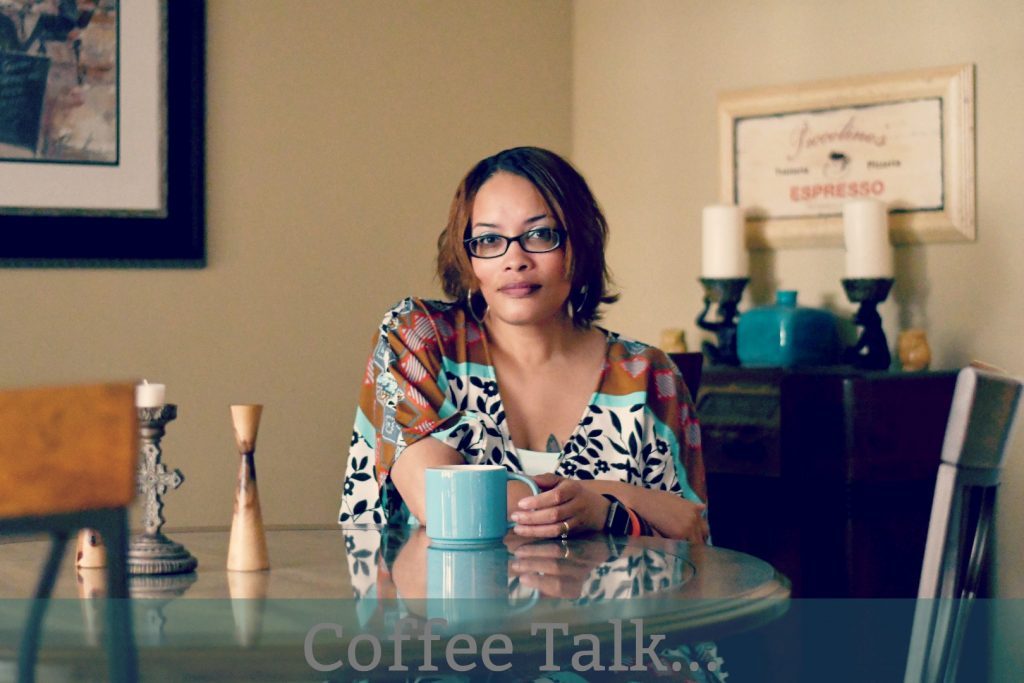