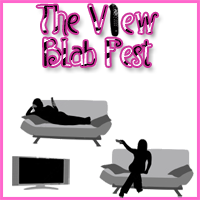 Today I woke up with such a massive headache that I didn’t think I’d get to watch The View. But I did it. Sometimes I can be such a trooper. Anyway, it was worth watching through one squinty eye so that I could keep up a running commentary with The View Brand Ambassadors on Twitter.

Anyway, you know how it goes, grab a cup of coffee (100% Columbian Coffee, if you please) and let’s talk…
Hot Topics
Naomi Campbell
She’s been hitting folks again. Are any of us surprised? This time it was her driver, who suffered a busted eye from being hit in the back of the head, yet he’s not pressing charges? Um, before I ask what’s wrong with Naomi, let’s try to figure out what’s wrong with the driver. If someone hit me you’d best believe I’d be pressing charges to the fullest extent of the law. Now we all know he’ll probably get some money off Naomi, but this woman needs to be stopped.
Trending
Style Imitating Art: The Hallucinogenic Toreador by Salvadore Dali

Sarah Palin
Apparently Sarah Palin did a bit of a stand up routine last night on the Tonight Show with Jay Leno, I didn’t watch it but they played a little clip ~ she was ok, she’s not a professional comedian so kudos to her for trying it. Joy Behar was a little harder on her, picking apart the jokes and her confidence for thinking she could do it. Elizabeth Hasselbeck, of course, jumped to Sarah’s defense and I have to agree with her. If Sarah were a Democrat, she would have been applauded as being brave for having the confidence to step outside of her comfort zone.

And when it comes to confidence, if she were a man people would appreciate that she has the confidence to believe that she can be president. The last thing anyone wants is some mealy mouthed, wuss with a complex running the country.

So it’s the end of 29 years of Oscar Specials for Barbara Walters. Wow, that’s a long time. After a brief retrospective of the specials, Barbara stated that the reason she’s ending her run is that she feels like she’s “been there, done that.” Um, I’d say so. I’ve caught a few of her specials but I’m not big on celebrity awards shows ~ really, when will those people stop congratulating themselves on their ability to pretend to be someone else? “Normal” people get put away for having multiple personalities. Just sayin’…

Guest
Lisa Kudrow
Lisa talks about her new show “Who Do You Think You Are?” which traces the ancestry of celeb families. This show actually looks very interesting. As a librarian and archivist, I’ve always had an interest in genealogy. When my father died, I remembered sitting in the pew and being floored as I listened to the preacher recite the legacy of my family and how my grandparents had helped to start a church in Alexandria, Virginia. Finding out your family history gives you such a sense of who you are and a feeling that you can accomplish anything.
To see what others have to say, stop by and visit my girls at It’s Kerry’s World and Parenting by Dummies (they’re the ones who started The View Blab Fest ~ love them!). They’re funny, insightful ladies who’ll have you thinking and laughing.
You can follow along, chat with and connect with other The View Brand Ambassadors every weekday morning at 11 AM EST on Twitter by using the hashtag #theviewmoms. Also, you can fan The View on Facebook and follow The View on Twitter.

Today I decided to plant a garden.  I know, right?  I love plants and flowers ~ it’s in the blood.  My grandmother […]

Just a brief vlog to let my friends know why I’ve been absent…  Naturally, I will update you all as soon as […]

On Wednesday afternoon, I received an email from my husband asking if I could come […]

I have two hobbies: I love to take pictures but I haven’t had a chance to go out in a while so […]